Trending
You are at:Home»Coding»Mobile Apps»Selecting the Best Mobile Game Creation Engine for iOS and Android
By Philip Bae on December 27, 2014 · Mobile Apps

Did you ever wanted to build your own mobile game app for both iOS (iPhone, iPad) and Android devices without getting too deep into coding or even cannot afford to hire a coder?

Do you want to be able to build a prototype quickly to both markets so that you can build a “minimum-viable product” and get your idea out there to the market to test before investing heavily?

Having been the coder myself, working full time in corporate world, with a family to look after, I usually don’t have much spare time to do my own personal projects. Especially after building a vocabulary building iOS app called Eloquently from scratch using Xcode, which was a great experience on its own, I know how much time it takes to do the native coding for even rather simple app like the Eloquently just one platform.

I needed a platform that allows me to create a game as least time as I can but decent enough quality for it to allow publishing of the game app to both iOS and Android market place. Here is a list of my requirements:

After spending good amount of time, I landed with the following candidates:

When I was first looking to create 2D games for iOS, I ran into Cocos2d and its fame for being free, with a huge community of followers, and majors games release under its belt, such as Farmville for iPhone, I quickly also found out that Cocos2d has Cocos2d-x project that allows coders to code under C++ but be able to port the code over to multiple platforms. If that wasn’t enough, they have now revamped its Cocos2d-JS which is a wrapper for Cocos2d-x that allows you to code HTML5 based games using modern Javascript to then be able to port it over to Cocos2d-x, which then allows the port over to iOS and Android: a perfect fit!

Though, I quickly realized that this meant full fledgling of hardcore coding, which I totally don’t mind, even could help with my resume, the thing I could not afford was time: I just don’t have enough time to do all of the coding myself, do the graphics, sounds, music, game play. Although it was so enticing, I needed a platform that alllowed rapid prototyping.

I have heard a lot about this game engine. In fact, this was the first one that I checked out to see if it would fit my needs. It has major games published and millions of downloads under its belt, it allowed building of the games using a scripting language called Lua, and allowed publishing of your app to iOS, Android, and now even on Windows Phone 8.

Even though it claims that it reduces the coding 10x less than as if you were coding in Xcode, I quickly realized that you had to worry about “coding”, aspects, variables, etc. Plus, its hefty entry price of $49/month for iOS and Android publishing, I wanted to look for a solution that really can provide WYSIWYG (What You See Is What You Get), and allow me to do the rapid prototyping.

Another worthy contender was GameMaker Studio. It has very detailed IDE (Integrated Development Environment) that gave a lot of control to the coder but still allowed decent drag-and-drop, and clicks to do some of the coding work, such as setting up the sprites.

Also, the great benefit for using GameMaker Studio is it lets you publish not only for iOS and Android, but even for Windows Phone 8, Xbox, and PlayStation (new for 2014), making it the most comprehensive publishing platform.

Though, this platform did not deter me to look for better and simpler solution. Its integration with the interface and coding threw me off little bit and its price tag of $799 to get Android and iOS export played some factor into the decision.

Ladies and Gentlemen, I introduce you to GameSalad!

As soon as I saw its interface and how it integrated the true drag-and-drop with the decision trees, exposing all of its functions, resources, attributes, scenes, and how it organized things in object oriented manner, forcing even the new developer to learn how to get themselves organized. It was a dream-come-true solution at an affordable price tag of $299 per year with support.

I quickly searched up tutorial videos and a few GameSalad hardcore users put up a really easy-to-follow tutorials that actually gave decent game functionality literally in less than one hour.

Also, great thing about this engine is that you can copy and paste many things such as Actors, or even rules, saving you to re-enter them. It allows object inheritance so that child object can inherit attributes and rules.

After doing a few walk-throughs, I was ready to create my first game app. Here is a screenshot from Balloon Master mobile game app: 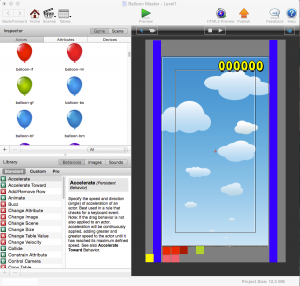 Though, there are some downsides to this engine. The whole IDE environment is rather sluggish and some time crashes. I had to often restart the application to speed it up. Also, because this is very high-level development environment with super minimal coding (or rather no coding), it has its own way of accomplishing certain functionality. My advice? I learned to quickly get around and even take different directions due to its limitations. One of the limitation I found was that the collision is limited to rectangle and circle and does not do complex shapes nor at pixel level.

With GameSalad, I was able to publish Balloon Master in about one month of development time, that is, only the weekends and a few vacation days (from Thanksgiving to Christmas). Since I didn’t have to do much coding, but rely on GameSalad’s framework, I was able to focus more on graphics, sounds, and game play, which are also as important as the game engine itself.

Now, I need to market the app, getting it in front of the right audience!