Trending
You are at:Home»My Life»Cars»Subaru’s Crash Avoidance System, EyeSight, Can Save You and Your Family’s Lives
By Philip Bae on April 15, 2014 · Cars

Days of self-driving car is coming near. Google is working hard at getting their self-driving car out to market and many manufacturers started to come out with their versions of crash avoidance or pre-collision warning systems on their high-end models.

Such crash avoidance system uses radars, sensors, and/or cameras to detect impending and imminent collision, warns the driver, and even stops the car entirely to prevent or minimize the frontal crash.

As I was shopping for a new car, especially an All-Wheel-Drive models to fend off the possibly worsening New Jersey winter, very fortunately, ran into several versions of this incredible technology.

My search started with Audi Q5. Their system is called pre-sense front. Turned out, at the time of research (2014), their Q5 did not even have the system as option. The only model that had this technology was with A3 and A6, which cost upwards of $60,000. To add to the pain, interesting fact was that the dealers did not even carry models with this technology. If you wanted one, you would have to order it from the factory and wait a few months. 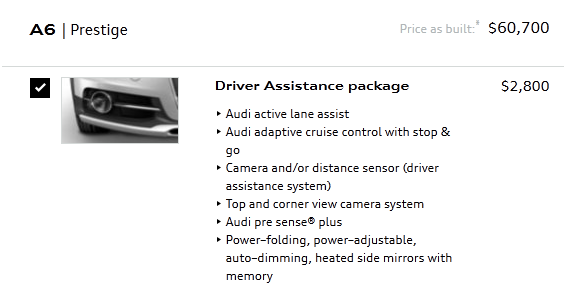 So, Audi Q5 was out, because it was a bit pricey but also there just wasn’t any Q5 with this technology in the lot. I quickly switched to more affordable models and started look into Subaru since it is known for its Symmetrical AWD, and Forester for it was Subaru’s version of rugged AWD model that won numerous awards in the past.

Luck has me that after I actually purchased the all-newly designed Subaru Forester 2014 2.5i Limited, I noticed that there was a version with an option called EyeSight. Albeit this option was only available on the highest model called Touring, it was definitely worth $5,000 extra. Well, it was more like $2,600 extra options such as HID light and Navigation, plus $2,400 for the EyeSight. After researching into EyeSight, finding out that this was exactly the technology I was looking for, but it had so much more than Audi’s pre-sense, for only $2,400, I quickly called up the dealer and switched it to 2014 Forester 2.5i Touring with Navigation/HID/EyeSight. To this day, this was the best decision I made in a long time!

Unlike other manufacturers, including Audi, where purchasing this whole crash avoidance system is very confusing and costly (the dealership usually nickel-and-dime you since saying goes that if you can afford bells-and-whistles, then they guess that you usually have the dough), Subaru’s option was completely simple: it is equipped only on its highest-end model and it cost $2,400 more. But even with the highest model, it was literally $20,000 cheaper than what might have been with Q5.

Are you ready to learn about EyeSight? There are numerous videos and articles that you can watch and read up, but to simply put, it uses two cameras to have stereoscopic view in front of the car and detects objects. This ability to detect objects in real-time is then used to provide the following life-saving, awe-inspiring, jaw-dropping, incredible technologies:

Here is a test of EyeSight from one of Subaru dealer’s demo:

Here is a video I created after getting fascinated about its feature:

There you have it! Please do me a huge favor, that when you are getting a new car, do consider hard getting a car equipped with a crash avoidance system. If it has an adaptive cruise control that can stop and go in traffic, even better! These are essential, must-have technologies that will pay for itself with one accident prevented, but even more so, these incredible technologies will potentially save you and your family’s lives from our negligence, mistakes, or even from others!