Trending
You are at:Home»My Life»Cars»2014 Subaru Forester 2.5i Touring is Equipped with Optional EyeSight Adaptive Cruise Control System That Even Stops and Goes Automatically in Traffic
By Philip Bae on April 15, 2014 · Cars

In addition to this award winning pre-collision breaking system, EyeSight also comes with this incredible adaptive cruise control system that allows you to actually let the car do the acceleration and deceleration for you, every day! Obviously, the adaptive cruise control is not for all driving situations, but for me, it fits 90%, finding especially most useful when there is heavy traffic.

What I do is, turn the adaptive cruise control on, then when traffic is moving, take the foot off the brake pedal, press set/resume button to start the adaptive cruise control, which sets the speed by default at 25mph. Then it detects the car in front, shows the car and the distance on the display, then speeds up and slows down automatically following the car in front, maintaining the safe distance (three car distance). Amazingly enough, it follows the car in front at any low speed, from 0-30mph, putting breaking and accelerating all by itself, until when the vehicle in front comes to full stop, it too puts the vehicle to full stop at about two feet away, alerts me that it is disengaging the adaptive cruise control so that I can take over and put my foot on the brake (yes, it wants to make sure that you are not dozing off!).

Here is my own recorded demo of this awesome feature. Notice how the system detects and accelerate and decelerate or even bringing the car to a complete stop as the car in front stops.

My wife is especially thrilled with the system, not for her own application, but for her to stop yelling at me for getting the car too close to the car in front. With this system, not only does it automatically sets the distance between the vehicle in front, but it stops all by itself at a safe distance! My wife is happy and I get to fiddle with this advanced technology all the time, especially when there is a high volume of slow moving traffic! 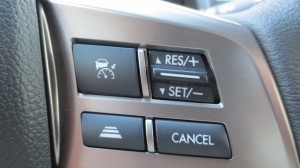 I would imagine that this system would also be incredible helpful for those with ankle problems, or ladies with high heels, where it is cumbersome and difficult to constantly push the accelerator and brake pedals back and forth. I know I’m getting totally spoiled here but you have got to try it out to see how this changes you. Instead of getting spoiled, you will soon really appreciate that you have this incredible technology at your fingertip! Thanks Subaru for making this possible for such affordable and efficient vehicle!

Although as impressive as the adaptive cruise control is (makes me believe that I am finally living in a 21st century), it does have some kinks.

When a car suddenly jumps in front, EyeSight does not detect it right away until the car enters into its narrow, one lane vision, whereas with human eyes, we would have detected the car way earlier and react. So, having this incredible technology onboard does not excuse you from not paying attention on the road. You need to be as alerted as you should be to make sure that the adaptive cruise control is actually fully functioning and behaving the way it should be.

Another interesting thing I noticed was that if there is no car in front of you, and reminds me that I am a creature of habit. When I ran into a red light, I assumed for some reason that the vehicle would detect the red light and stop, but quickly found out that it doesn’t and that you (yes, you the human!) have to press brake pedal to disengage the system and bring the car to stop. (Subaru: this would be a great addition where it gives off red traffic light warning) Also, for some reason, it had difficulty detecting the car that was stopped on the road at a red light.

Last, but not least, it is not too useful in tight twisty roads since the system won’t follow the too tightly curved road. I found adaptive cruise control system to be little too dangerous in this particular condition. But I guess it was never meant to be used in such tight twisty roads. I don’t think you would “cruise” around those curvy roads!