OK. Who doesn’t like those technology gadgets in cars? Many high-end luxury brands are known to carry these technological gizmos but usually with very high price tags. Yes, my Subaru carried close to 10K more from its base model, but especially with the EyeSight, the price was a complete bargain, when compared to Audi Q5 Prestige with Driver Assist package, that I saved over 20K!

This is the coolest thing ever, but requires some getting used to. As long as you carry the keys with you, in your pocket or purse, just touch of the driver/passenger handle unlocks the vehicle. Or touching of the special corner area on the handle then locks the vehicle.

I think this feature is really cool. I always warm my car up, regardless of season. One way to tell whether my Lexus IS300 was ready was that, in winter, the heat would start to turn on. 2014 Subaru Forester actually has a little indicator light initially showing in blue to indicate that the car has not been warmed up. Once the ready is warmed up, the light turns off. It even keeps the RPM up to cut the warm up time shorter.

Headlamp with LED headlamp style and side mirror blinkers

Cool enough, Subaru Touring comes with the High-Intensity Discharge headlights with LED styling. The trick is that, during daylight, you would have to turn on the night lamp lights in order for you to turn this LED style light. 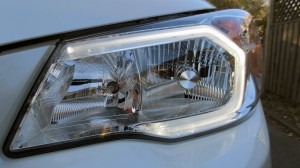 Another very envious car gadget that I see these days with luxury models are this automatic rear hatch, or liftgate. With push of a button, the liftgate would automatically open up! So cool, and pretty convenient. You no longer have to shut it down and no worries of getting anyone’s hand stuck in between!

Not as used but one great amenity of this car is the panoramic moonroof! This is not as big as the Audi Q5’s panoramic sunroof, but it definitely extends back enough to enjoy the sunlight. It is pretty wide and massive!

A must have for any cars these days! Though, I would agree with other reviewers that Subaru’s infotainment LCD screen is little too small for the detail that the rearview backup camera would typically have.

The infotainment LCD display has many options that allows the driver to set, including maintenance reminder, unlock options, MPG options, to name a few. Here is my recording of the whole infotainment options.

I would also agree that Subaru’s navigation system is not the most advanced thing out there. Honestly, my $150 Garmin actually does way better job. But hey, it is fully integrated with the vehicle’s audio, and bluetooth system. One thing I also noticed was that the Navigation has a little SD card slot which already has an SD card in it. I didn’t realize until I tried to replace it with my own music in another SD card that this default SD card actually contained the whole navigation software with the map! This only leaves me the USB port to add my own music collection.

The Harman Kardon audio system is not that bad. Having been a car audiophile a while back, I know how cool stereo systems sound. This was not it. 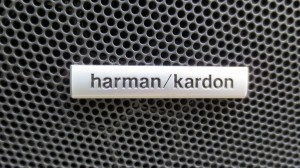 Again, better than not having one, but boy, the system doesn’t recognize as well as I wish it could be. It rather distracts you initially. I think it will take good getting used to.